Interview with Martyn Bates. It has been translated into french and back again by different people, so some of the original intentions and meanings may have been somewhat distorted. (Les Inrockuptibles, no. 14, 1988) 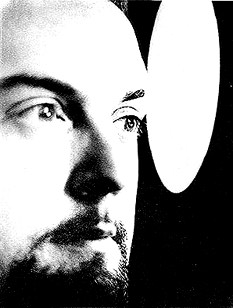 “Eyeless In Gaza could and should continue forever as long as Peter Becker an I both continue to enjoy our unique connection – it feels like it should last forever, this special link; ‘I dreamed I saw you, walking, walking in the world..... .’” – Martyn Bates

Martyn Bates presents his song settings of James Joyce’s full cycle of poems Chamber Music (see the biography for more info about this) and also his collaboration with Mick Harris on Murder Ballads. I list what appeared in the program and Martyn’s comments (though not the comments by the program’s host). The program was aired on the Dutch radio on April 25th 1996.

“… my absolute favourite poets have to be: DH Lawrence and Dylan Thomas” – Martyn Bates

Mick Harris & Martyn Bates. Interviewed by Aldo Chimenti. The interview was done in the Spring of 1997. (Rockerilla, August 1997)
The Italian version.

“On setting out on ‘Passages’, both Mick and I were conscious of trying to steer this so-called isolationist cul-de-sac from out of its dead-end and into a brighter, broader and far more open field” – Martyn Bates

Max Eastley: Images of Sound. Interview with Max Eastley with comments on Songs of Transformation by Fergus Kelley (Avant, late 1997)

Martyn Bates – Gorge des Ployés. Article on Martyn Bates by Spahi Amadeo. It was meant for publication in the Avila magazine, but is as yet unpublished (apart from here). (pdf, French)

Interview with Alan Trench on Twelve Thousand Days and the future. This review was also published at Ikonenmagazin.de with some nice photos. (Martyn Bates was also meant to be interviewed.) (Fluxeuropa.com, January 23 2004)

‘Ambivalent 15’ chart published in the March issue of The Wire.